Maybe it was the rain.  Maybe it was the dog in the backyard (a Border Collie). Maybe it was that attic with the arched beams—solid.  Climbing the steps, I felt like Jonah entering the belly of the whale.  The house was sound, well-built with corner windows that flooded the bedrooms with light.  It had Redwood siding, fine white Oak floors that just needed one sanding to get the blood out (two large splotches in the back bedroom where drugs and booze left body fluid fossils in the floor).  The grain, once smoothed with stain, would be gorgeous.

The place was packed with “stuff”:  a large pool table which, Paul (realtor), said I could sell.  There were sheets of tempered glass in the backyard which prompted Mark (handyman) to lean into my ear and tell me on the sly: that’s worth a lot of money, wonder where he got it.  There was a work room, attached to the sixties style house, complete with electricity, storage drawers, peg boards and oil-stained carpet.

We made sure the dog had water (in the rain!-nothing made sense with this house right from the start) and we went back into the house where a mouse scurried along a wall and down a crevice into the crawl space.  I thought it was cute.  (Where was my head?)  There were jars of peanut butter, crackers and beans in a bedroom closet. A glass pipe lay atop discarded clothes.  I remember the pea green fleece and the sooty pipe, looking used.  Crack pipe, Paul said, they were smoking crack.

So, I asked about the large meat hooks above the kitchen counter.  Are those for buckets, I asked.  Do you think they were cookin’ Meth?  No, no, Paul said, the hardware on the cabinets would be corroded.  Paul was a criminal lawyer at one point. I’ve seen meth houses, he said, this is not a meth house.

The home inspector showed up on a long rainy day—the sugar Maple leaves of orange and gold washed down. Lights were needed though it was late morning. As he moved around the kitchen, he spooked cockroaches out of corners, warned me of the corroded sixties plumbing and waved his hand through the holes in the wall. I was steadfast. I have a vision for this house, I said.

The trouble began with Rolando. He was the once-sober man staring out of the family portraits on the wall—his Mexican wife and cocoa-skinned children smiling at the word “cheese” the way children do.  When Rolando’s wife left—like exiting a frame—she took the children with her and he turned the place into a halfway house.  Guys in navy hoodies came to get high and leave low.  They left burritos in the microwave undiscovered ‘til we pulled the appliance from the wall and an army of cockroaches fled their feast:  Cook-a-roch-ez!, said my helper, nearly dropping the thing. They left lottery tickets in the dust, scratched off loss.  I found a nose ring, tags and hanger from a Target bra, and sex lube in the bathroom.  Beer caps were all over the yard like landscaping buttons.

Rolando hunched in the corner of the living room the day I returned with the heating and air guys.  The guys (brothers) flagged the furnace for improper drainage, faulty ductwork and gave me a sky rocket bid.  Rolando leaned against the door trim and whispered: they’ll take advantage of you; they see you—single lady—they’ll charge thousands; I can get it done cheap.  He had been camping in the house, sleeping on the floor next to the pool table. Rehab didn’t want him anymore.  He had a key.

He was still there the night we closed on the house.  The realtor wouldn’t release the money to his mother, a cleaning lady with broken English who wrote her number in tired scrawl on a notepad in case I wanted to hire her.

It was November. Dark. A time for panic. When I got to the house, Rolando and the neighbor, Juan, were loading the pool table onto the bed of Rolando’s white pick-up.  (The pool table was the one thing he could sell.)

Rolando shook my hand; he was crying and melancholy with alcohol.  A few days earlier he told me this: “You know when the tree falls down, they make wood.  Well, I’m the tree.”

That night was November 7th.

Juan, holding his glam cat Lola and wearing a black leather jacket, told me there were lines outside the church waiting to pay respects.  “Rolando knew everyone,” Juan said.  That Sunday I was picking through trash and a parade of people filled the street singing songs in Spanish, in harmony.  The throng was bright like a Guatemalan rug shaking song out onto the streets. Then, they paraded back to the sanctuary of the church.

A few neighbors stopped by:  Oh, we’re glad you bought this place. One even said she didn’t like the view (referring to all the trash bags in the cart port) and hoped I’d clean it up.  I did. I hauled away bags of trash: soiled clothes, broken blenders, platitude plaques: bless this day.

I took rain-bloated stereo speakers to solid waste recycling along with stereo units—colored wires stuck out like crayon box pieces.  The saddest was finding school pics of his kids—grease-spattered, stuck smiles on the countertop.  His mother pulled up to the curb and had her daughter ask me:  Are there any toys left?  The broken kid sized cars and playhouses were all headed for the landfill.  Juan took the collectable 3 foot yellow M&M peanut man holding a tray and used it for a bird feeder.

By December, I was barreling down a rabbit hole.  I used home detection kits bought off the internet:  did the swab turn blue? (like a pregnancy test)—ok—no meth residue on the walls.  Then, right before Christmas, I sent a wall sample or “wipe” to a lab through a company that advertised with a logo of fire-blazed orange and the word Crisis. The meth residue came back 3.5 micrograms per 100cm squared of wall space; apparently this was high and dangerous.

Meanwhile, Handyman Mark, unwittingly busted a water pipe and water flooded the crawlspace through the night.  Shortly after, Juan told me Rolando and his wife lost a baby and buried it in the backyard (!).  “By this stone,” he said and he pointed the shovel to a spot.  THE SPOT.  We unearthed a jar filled with clear fluid and lumpy flesh like a gob of snot.  There we stood—staring at a canning jar.  Do you want it, I asked, not knowing what else to say.  We held our noses, Juan opened the jar and dumped the mystery into the ground. We made the sign of the cross (in a bizarre effort to be reverent) then, stood there silent, holding an empty jar.

I was planning to paint the walls, refinish the floors and then I had this meth debacle. It wasn’t meshing with my motto:  never put clean over dirty.  Put clean paint on clean walls. I sat in the library parking lot, looking at a book with photos of bright pink Sudafed stains and people scratched raw by the drug-induced belief bugs were crawling on their skin.  I called my friend in tears:  I feel like an idiot, I said.

Should I pay $7,000 to have the place professionally cleaned.  Who were the professionals?  The guy on the other end of the phone kept getting interrupted by his grandkid; he told me the cleaning chemicals would bubble the paint on the wall.  He told me: no, I could not hire an independent lab to get meth residue readings and, no, he had to hazard clean ALL the rooms not just the ones affected.  Another guy worked from a wooden desk in a stark room (I imagined from the quiet yet heavy thud of his words). I said, “Please stop calling me m’am; you make me feel like I’m a hundred years old.

I talked to a chemist from an accredited lab who told me he would live in a house with meth residue readings as high as 7 or 8 and not worry about health effects.  The residue is non-volatile, he said.  Internet articles about meth readings of houses in New Zealand (where Meth use has flourished) said there was too much hype about meth residue and houses were safe with simple soap/water cleaning and new paint.

I lamented to a friend:  I really wanted to do the whole HGTV makeover thing with this house…take it from A To Z.  Instead, he said, you got from A to M (M for meth, of course).  I was clearly in the rabbit hole choking on dirt: Clean paint over dirty walls.  Even the warmth of that whale belly furnace and the vision of butterscotch smooth wood could not settle me.  Every time I opened the door, the yellow daisy print curtains would sway like a field of flowers in a prescription drug ad: were they mocking me?

I sold it.  I climbed out of the rabbit hole and sold it at a loss. (My accountant said, be patient—don’t lose money.)  The week we went into COVID 19 lockdown, I sold it to a single mom who didn’t have a qualm about the meth residue that I flagged in the real estate disclosure; she would paint (clean over dirty). She loved the workroom where she could set up her kiln.  She loved the large yard, the corner lot and the Maple trees gutted of leaves by winter but reaching tall with promise.

She had looked at so many “dumps”—one house coated nicotine yellow, doors off the hinges.  This was a house with a door she could walk through.  She hugged me. It was that pre-COVID period still lucent with people moving toward each other rather than away; we were just on the cusp of losing that gesture of normality.  Who knew.  I can still see those losing lottery tickets tiling the corner of the room with the Superman blast of colors and loss scratched off in strategic penny strokes.   I took comfort in what a friend said to me regarding the sale, regarding the single mom: “Maybe you were her lottery.” 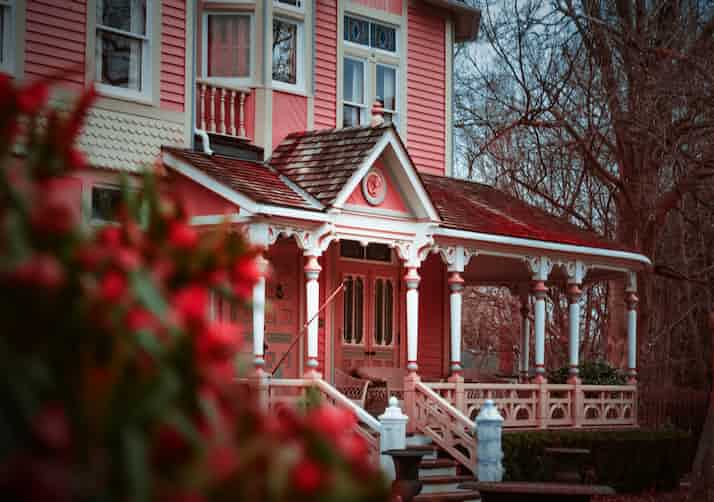 I have lived in the Ozarks for sixteen years teaching and writing. (I’ve also done some house renovating!) I wouldn’t be happy without my menagerie of sixteen chickens (two of which are roosters), a dog, a cat and three Bettas. I left my teaching job in August of this year and have focused on writing more exclusively. I am currently working on essays and poetry.