Thirty thousand feet in the air, there is only one place to find privacy: the toilet. I slide the lock that turns on the light, sit down on the white seat, put my hands together, close my eyes, breathe deeply—take in the nearly overpowering smell of bleach—and try with every ounce of my rational being to stifle the rising panic. But it’s like trying to stop myself from throwing up.

One thought keeps ringing in my head: You can’t do this.

Only a few minutes before, I was sitting in my seat trying to pick a movie, so many choices. I happened to glance at another passenger’s screen a few seats down and across the aisle. It was Moana—the scene where the titular heroine is attempting to put the green-spiraled heart back into the angry, volcano-spewing god, Te Fiti. Having a six-year-old at home, I was more than familiar with the film.

But it was at that moment—Te Fiti flinging boulders of flame—when my impish brain decided to inform me, You can’t do this. You know you can’t.

With that single thought, something exploded in me. My heart started pounding, my hands beaded sweat, my thoughts coiled and rolled down the rabbit hole. I knew this sensation all too well.

We’d been flying only a few hours, which meant I still had ten hours to go on this flight to Tokyo. Then the layover. Then another flight, the third leg, an additional agonizing eight hours to Jakarta, my final destination.

You can’t do this. You know you can’t.

It wasn’t like this was my first time flying—I did that when I was five. Since then I’d been to five continents, more than thirty countries. I couldn’t count the numbers of planes: from packed 747s to prop planes into the Amazon rainforest, planes diverted by North Channel winds to smooth landings on one of the most dangerous airways in the world. I’d done this route before, too: the United States to Tokyo to Jakarta.

I’m even working on a book about travel, for Christ’s sake.

I escape Te Fiti and hurry to the bathroom, nearly bumping into my flight attendant, a pleasant young Japanese woman with a reassuring smile.

Many people fear the airplane lavatory because it’s as claustrophobic as a tomb. But to me, it’s the best place on a plane because it’s the only option to escape the unrelenting humanity of coach. In the flight just before this, I sat next to an elderly woman who spent the three hours quietly throwing up in bags, which I stoically handed off to the flight attendants.

Once I have taken a few deep breaths, I attempt a good pep talk. Okay, Jeremy, this is your OCD talking. Everything’s fine, it’s all good, it’s hunky-dory and peachy pie. Just pick out a movie and get your mind off the panic. One day at a time . . . or, in this case, one minute.

“You know you can’t do this,” the voice in my head says again. “This trip will definitely kill you. You need to find a way home, or you or your family will die.” The voice is Steve’s.

Steve is the name I’ve given to my obsessive-compulsive disorder. I did this to try to create some distance between my chronic mental illness and my daily self. I named my depression Malachi because he’s a badass in a biblical kind of way. Steve and Malachi, I tell myself, aren’t me. They are the disease.

But at least Malachi is interesting; Steve is unpardonably boring. He says the same thing over and over again. He’s a busted grandfather clock, chiming every minute; he’s a bored elephant in a zoo, pacing the same path until his footpads bleed; he’s the friend who tells the same anecdote on every occasion. It’s almost like Steve is obsessed.

This is what OCD is: It’s the same song stuck in your head, playing forever.

Unfortunately, Steve and I can’t stay in the bathroom the whole flight, debating. The vacuum flush of the automatic toilet startles me, making me imagine what it would be like if something struck the plane. Always keen to help, Steve reminds me that there’s nothing between myself and the atmosphere but a few sheets of aluminum. Like a magician, he conjures up the image of another plane colliding with ours midair, the whole craft opening up as I’m tipped into the frigid emptiness.

It isn’t the fact of death that alarms me so much as the terror of plunging thirty thousand feet, powerless.

I head back to my seat, pretending I’m still alone. I get out the rather enormous pillbox my wife sensibly sorted for me and take lorazepam, an anti-anxiety drug. I put it under my tongue and taste imminent serenity. The texture is chalky and the taste actually mildly sweet. It’s one I know well.

Let’s say I succeed today. Let’s just say for a moment I survive the next twenty-plus hours to make it to the hotel in Jakarta and the sweet release of sleep. Then it’s twelve days in Indonesia, without my wife and my child, but with a hundred thousand things that could go wrong. Snakebite, car wreck, rabies via stray dog or cave bat, a ferry capsizing, a volcano blowing, an earth- quake cracking and swallowing. Or I could catch any one of a cavalcade of tropical diseases, be stampeded by an elephant, crushed by a falling tree, or maybe eaten by a tiger—they have those. There are just so many ways to die when you’re not at home.

I buzz the flight attendant, hoping her smile will bring me back to reality. When she arrives, I order a glass of wine. My psychiatrist would scold me —mixing wine with a tranquilizer. But I don’t care. I’m fucking desperate.

I finally pick a movie: It’s called Manchester by the Sea. I don’t know anything about it, only that it is critically acclaimed. A third of the way in and I’m sobbing now. This movie should come with a warning: Not suitable for those experiencing in-flight panic attacks. I try to switch to something else, something lighthearted—Planes, Trains and Automobiles (who picks these goddamn movies?). At this point, I’m too deep into this horror show of a film, and I force it down.

I miss my daughter and my wife; I miss them like a physical ache.

I want to talk to someone—my therapist, my wife, a friend . . . even this flight attendant who seems as chill as an ice cube as she’s riding in this death machine. Steve in my head continues repeating his mantra: “You know you can’t do this. You know you can’t.” I suddenly feel hot, clammy, my stomach twists. Oh, Christ. Not here, not now.

I’m getting sick, and we’re in the clouds somewhere above the ocean—hours away from Tokyo. I ring the flight attendant again and ask for a thermometer. She brings me one. I put it in my mouth.

Oh. I slowly remove the thermometer from my mouth. I smile and nod as if I totally knew that . . . and was just nibbling on this armpit thermometer because that’s the kind of hilarious guy I am. I wipe it off on my shirt and shove it under my arm. I’m certain it’s going to come out saying 102 or 103. I imagine the smiling attendant picking me up and carrying me into First Class, bundling me in blankets; she strokes my hair through the rest of the flight, sings songs I don’t know because they’re in Japanese, and spoon feeds me ice cream.

I fantasize about landing in Tokyo and getting a hotel—a nice room with a big bed, a hot shower, and room service with housemade ramen—and then taking a flight home tomorrow, essentially calling in sick on my two-week reporting trip on Sumatran rhinos.

The kindly attendant, my only anchor to sanity at this moment, returns with some Tylenol for me. I take it and ask for another glass of wine, trying to hide the tears strolling down my face.

And Steve says, “You know, you’re totally fucked right? Why are you so stupid to keep doing this to yourself? Why don’t you stay at home where people like you belong? You’re not going to win this time. You’re going to die, and it’s going to be awful.”

Twelve days later, I walk off a different plane into the Minneapolis airport. I gather my luggage and head toward the exit where my wife and child are waiting to pick me up. 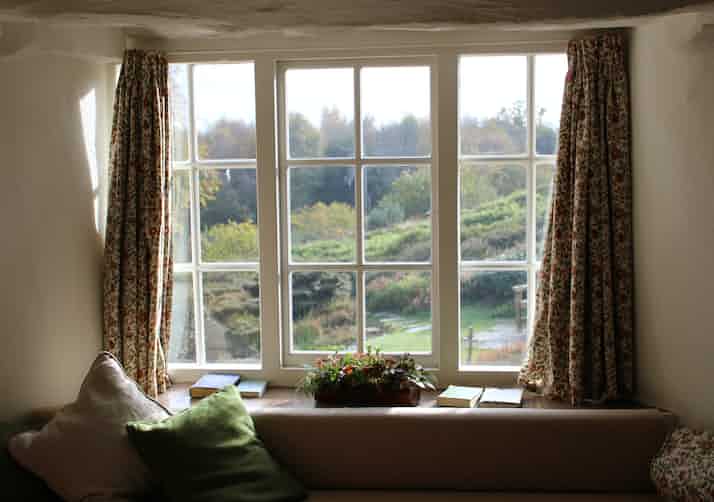 We Are but Windows by Brianne Grothe

Jeremy Leon Hance is writer and freelance environmental journalist. He is the author of the 2020 travel memoir, Baggage: Confessions of a Globe-Trotting Hypochondriac. His works has also appeared in Mongabay, the Guardian, HuffPost, the Daily Beast, Ensia, YaleE360, Sydney Morning Herald among others. A story on the Sumatran rhino for Mongabay was chosen for Best American Science and Nature Writing in 2019.